Welcome welcome welcome to another exciting edition of the best blog you will every read in this lifetime. It may also be the only blog you’ll need in your lifetime. This weekend I had the opportunity to enjoy another epic time at PAX East, one of this biggest gaming/nerd conventions on the eastern seaboard. I’ve been attending the convention since its youthful beginnings in 2010 as a small show. The show has only grown exponentially over the years. Starting in 2014, I begin Cosplaying (The practice of dressing up as a character from a movie, book, anime, or video game). Cosplaying was something I always wanted to do but, never had the courage to pull off due to lack of confidence. I’d see all these ambitious looking cosplays and would get super intimidated. In 2014 I decided I would come out of my comfort zone and attempt an outfit. It wasn’t anything overly ambitious, just something from one of my favorite game shows of all time (Legends of the Hidden Temple). It was such a thrilling experience for me because I was finally diving into something I loved. It was also liberating due to the bullying I experienced as a child.

Back in my day being nerdy was not as cool as it is now. Technically being nerdy still isn’t that cool. It won’t get your ass kicked but, you’ll be lucky if it doesn’t scare women away. Point being, I was never praised for being nerdy. Being an Autistic nerd cause problems for me growing up because video games and anime were the only things I knew how to have conversations about. It would be a while before I found people as nerdy as me. Most nerds are viewed as having no life, never getting laid, etc. There was nothing good about being a nerd during my youth, and at times I was ashamed of it. I never tried to hide it because it was who I was. Video games, comics, anime, etc provided me solace during many times in my childhood where the world refused to understand me and give me a chance. After a while it all became a part of who I am and what better way to wear that badge than to dress up as your favorite characters from various shows. Putting on that costume in 2014 and walking around the city felt liberating, it was the biggest fuck you to those who thought I was weird. It was one of the most freeing experiences ever. I shall take you through my outfits through the years and explain the significance behind them all. 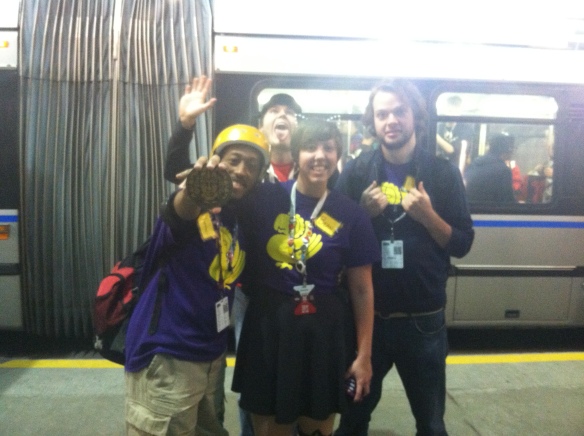 Growing up, Legends of the Hidden Temple was hands down the best game show I had watched. There was something very thrilling about watching people partake in a test of knowledge followed by a series of physical mini games to determine who gets to enter a temple. Watching the temple portion was a thrill in itself. It often consisted of those who got their asses handed to them and, those who watched the show enough to know exactly what they were doing. I never saw anything like it and, it blew my mind. I had always wanted to do this as a Halloween costume but, I never got to it. When PAX rolled around, I figured this would be a good place to start due to its simplicity. The best part of that weekend was finding other who repped the same team I did. The Purple Parrots don’t get much love on the show due to their poor winning record during the series run. Purple is one of my favorite colors, so why not. 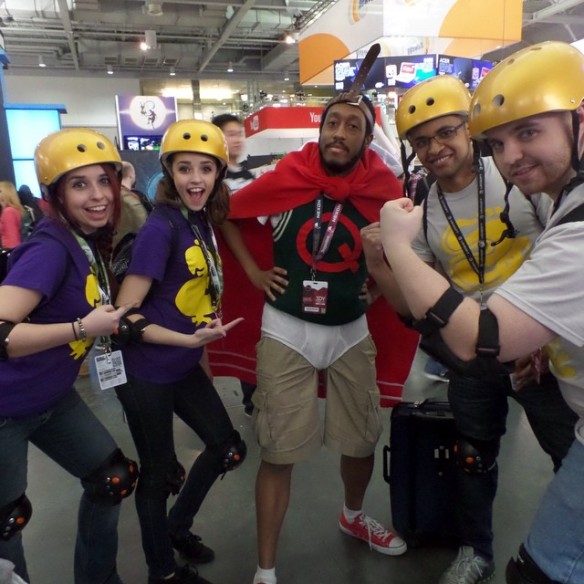 If you’ve never heard of the show Doug then I feel really bad for you. That show was the pinnacle of my childhood. After having fun with the Legends of the Hidden Temple Cosplay, I decided to continue the trend of shows from my childhood. Another motivator for this cosplay is that it is often a popular costume idea but, people keep screwing it up. I had yet to see a high fidelity Quailman Cosplay, so I wanted to prove that it could be pulled off. I went to the thrift store for the vest and belt, found some old khaki shorts, fashioned a cape from fabric, cut and sowed the Q and voila! You have probably one of the most memorable costumes of 2015, So memorable that I couldn’t make it far without people asking for my picture. It was even famous enough to warrant the attention of Jessica Nigri, a very popular pro cosplayer. This was one of my favorite years because it  was such a simple low cost outfit and yet, it was incredibly iconic. The show Doug transcends two different generations. It started in the 90s and, had a reboot in the late 90s that ran through the mid 2000s so it graced many generations. This outfit was the peak of my love for all things 90s and I often re wear the costume for other events that are 90s themed.

Those who grew up in the early 2000s will remember this awesome guy. Static Shock was something special because it was one of the first times I saw a Black Superhero in a show that tackled black issues. It was incredibly well written and I always loved the resourcefulness of the character. To stay with the theme of childhood costumes, I decided to tackle this beloved character. This costume was another big hit and warranted someone asking to take my picture every five steps. On the last day of that weekend, while walking outside someone started blasting the theme from this show from their car. It was pretty awesome and was a great way to end the weekend. This would be my second most expensive outfit and, one of the tougher ones to put together. Cutting out the logo was a bit of a pain but, this biggest pain was spray painting those damn boots. I found boots that matched the style I was looking for but, they were water proof so spray paint wouldn’t bond to them as easily. It took five coats of spray paint to get those shoes the color I wanted. They came out great but, it was pretty tedious. 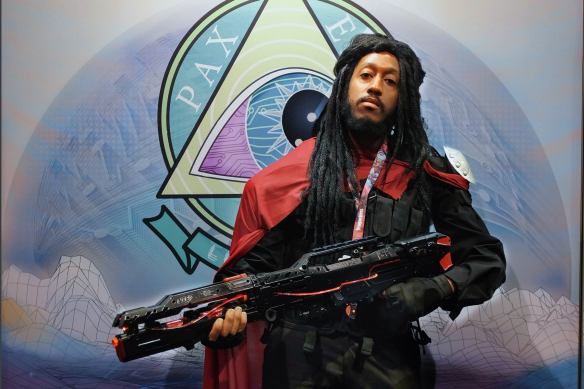 This years cosplay and probably the most expensive. With clothing articles and accessories totaling $350, this is as ambitious as Cosplays will get. Bishop was one of my favorite characters from X-Men in my youth. There was something so bad ass about a big ass dude with guns and he was black, so that was a huge plus. This is probably one of my best looking outfits to date. I Spent a month and a half putting this whole thing together and I was very pleased with the end product. Walking on to trains with this outfit was the ultimate fuck you.

I’ve grown to love cosplay and could do it every day if I really wanted to. It’s not that I don’t like me, it just that sometimes I want to take a break from it. Somedays I want to be Lucas Bishop, or Quailman, or Static Shock. I can only play these roles for so long before I have to go back to being Flemmings. The only person good at being me is me, so some one has to do it.

This site uses Akismet to reduce spam. Learn how your comment data is processed.