Blue shirts, blue buildings, blue ribbons. It’s Autism awareness month again ain’t it? Every year I have to watch the same damn thing unfold. Once again Autism Speaks is out on another mission to sound the alarm about a threat that doesn’t exist in order to pull in money that won’t go towards helping the very people the organization has sought out to exploit. You’d think creating this panic about Autism would be more played out than Drake songs on the radio but, unfortunately they’re always at it and have gotten increasingly more successful at duping unsuspecting people into throwing money at an organization that does not give a flying fuck what us Autistics actually have to say. For an organization called Autism Speaks, y’all sure as hell do a lot of the speaking for us. Due to the organization’s heavy presence during the month of April, people automatically assume that these guys are the gold standard of Autism organizations. Unfortunately, these guys have been responsible for a lot of the negative stigma surrounding Autism. Famous pieces like Susanne Wright’s “A Call to Action”, the documentary “Sounding the Alarm and, “I Wish My Kids Had Cancer: A Family Surviving the Autism Epidemic” seek to make Autism so scary that people will run to their senators and force them to provide more funding to Autism research,. Now don’t get me wrong Autism is still one of the least funded disorders but, the type of research Autism Speaks is seeking has all the wrong intentions behind it. They see Autism as something that should be eliminated instead of trying to advocate for better supports that would allow those on the spectrum to be the best possible versions of themselves. I shall leave you with a few things to think about. END_OF_DOCUMENT_TOKEN_TO_BE_REPLACED

Blue Buildings, blue shirts, blue merchandise, everything’s so damn blue it looks like an episode of the Smurfs. Now why on earth could everyone be wearing blue? Are you wearing blue because you just happen to love the color blue or, are you wearing it because Autism Speaks told you it would support a cause predicated on spreading the wrong kind of awareness about Autism? If your answer is the former then good for you, everyone is entitled to what ever color they choose. If your answer is the latter, have a seat! I’ll grab you the best seat ever because I’m gonna give you a piece of my mind like I blew my own brains out and lived long enough to hand you the fragments. Now you’re probably wondering why an Autistic person such as myself has a strong dislike for a organization that is constantly spreading awareness about Autism. My issue with the organization is that the kind of awareness they spread is detrimental to the world view and perception of Autism. END_OF_DOCUMENT_TOKEN_TO_BE_REPLACED

Another year, another dollar. Gosh is this blog really two years old? It feels like yesterday when I decided to start spilling my feelings and opinions on all things Autism on the internet. It’s been a pretty crazy year of blogging and antics. From dragging Autism Speak’s name through the mud to dragging the names of really shitty parents of children on the spectrum through the mud to voicing my opinion on all things Autism, this year has been a thriller. I’m thankful to have so many loyal readers, a decent amount of which live across the pond. I never thought this blog would get all of the positive buzz that’s been getting over these years and for that I am truly thankful. It’s people like you that give me the energy to continue writing. Get ready, because this coming year will be huge as far as this blog goes. Now I had a long synopsis of these two years planned for this post but I just couldn’t come up with anything so I will leave you with a picture since those things are apparently worth a 1000 words. 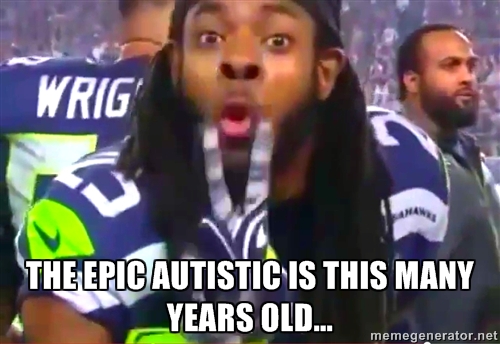 No, this isn’t some awful coding glitch or an illusion. Unlike all the April Fools pranks you will see on Facebook today, this blog post is real. It’s been quite some time since I last wrote anything on here. To be frank, I’ve been extremely lazy and honestly didn’t feel like writing anything. Well I’m back and once again it’s time to kick some ass one word at a time. While people know this day to be April Fools day, it is also the beginning of Autism Awareness Month, the month where Autism Speaks shoves their “Light It Blue” campaign and misguided agenda down your throat faster than breathing tubes in operating rooms. The amount of sometimes harmful propaganda pertaining to Autism can be overwhelming and for those diving into an ocean they know nothing about, it can be the equivalent of climbing Everest without a map. END_OF_DOCUMENT_TOKEN_TO_BE_REPLACED

Normally, I’m a calm person that tries not to let many things get to me. Everything I read is usually with a grain of salt, that is until a parent/advocate for parents on the spectrum decides to write the type of garbage that involves the reinforcement of debunked myths and even goes as far as comparing Autism to public health emergency no less deadly and devastating than Ebola but we’ll get to that one shortly. Last night I read the type of article that makes every single one of my braincells want to take a loaded gun to their heads. Now before I can go any further, y’all have some assigned reading to to? I already know what you’re asking, “Assigned reading? The hell is this high school?” No but in order for you to feel and understand the rage in these next few paragraphs implore all of you to kill some braincells with the smut I’m about to post at the bottom of this paragraph. Don’t worry though, I’ll once again be waiting right here as awkwardly as Dora The Explorer while she awaits your answer.

By now avid readers of this blog ave noticed the awesomeness of many of my blog titles on this site. From “All I Want For My Birthday Is a Big Booty Hoe” to “There Is No Spoon, Then You Will See That It Is Not The Spoon That Bends But Only Yourself” or “You Borrow My Brain For Five Seconds and Just Be Like “Dude Unplug this Bastard, Can’t Handle It!!!!!”, coming up with such EPIC titles is a science anyone can master if you’re willing to think outside the box. If you’ve come here with an open mind then I shall bestow upon you some of my techniques for making epic blog titles. END_OF_DOCUMENT_TOKEN_TO_BE_REPLACED

Damn! You mean this blog is really a year old? Wow, It’s still hard to believe I’ve been writing this blog for an entire year. 50 something posts later and I’m still getting started. Before we take a look back through a great year I just want to take this time to thank all of my loyal readers, you guys are the reason why I delicate the energy I do to this blog. It is an honor to have the opportunity to use my experiences to enlighten everyone. Well without further adieu, lets go through my top favorite blog posts from the year in chronological order. This list will serve as a refresher for those who have been reading my blog since the beginning and as a sampler for any newcomers. END_OF_DOCUMENT_TOKEN_TO_BE_REPLACED

So recently I watched a new Autism documentary called “Sounding the Alarm: Battling the Autism Epidemic” or as I like to call it, a 57 minute commercial for Autism Speaks’ vile agenda. Now I stumbled upon a trailer for the documentary on Facebook a few days ago and already I felt uneasy with the tone of the trailer. The title itself was enough to turn my stomach a bit. First of all, the words “Autism” and “Epidemic” should NEVER be used in the same sentence. It also shouldn’t be in the same sentence as “Disease”. A disease shortens ones life expectancy has a negative impact on ones way of living. Being Autistic may make it difficult a times for me to connect with people but my way of living is no different than that of a healthy person. Now the point of this movie is to shed light on a big problem in this country and that is the fact that not every single state has insurance coverage for service for those on the spectrum such as ABA therapy and other early intervention services. The problem with this documentary/57 minute public service announcement is that at some points of this documentary it conveys this problem using the same fear tactics used by Autism Speaks. As a matter of fact, members of Autism Speaks including Suzanne Wright have a decent amount of airtime in this documentary.  END_OF_DOCUMENT_TOKEN_TO_BE_REPLACED

They say nothing says momentum, milking, and capitalizing on acclaim and attention like making a sequel to your critically acclaimed work. Nothing says ‘Highly Anticipated” like making a sequel to a highly praised movie or a multi-platinum album. Just recently, Eminem released a sequel to his critically acclaimed “The Marshall Mathers LP” and album that made parents everywhere cringe, an album I begged my mother for with no success, an album that I had to sneak into my house in the form of a burnt copy thanks to the dawn of commercially available CD burners in that day. Movie studios are notorious for making sequels for the sake of capitalizing on a films success however, few will make sequels for the sake of expanding a universe that has a lot of potential to grow and most importantly, resolve any conflicts that were unresolved in the previous film.

END_OF_DOCUMENT_TOKEN_TO_BE_REPLACED

I’m going to talk about a subject that many Autism Speaks supporters may hate me for by the time this is done. Now you’re probably wondering why a person like me would have such strong feelings against well known organization that is very active with getting awareness about Autism out there. Tell me something people, of all the time you’ve followed the organization for those who do how often do you actually see something on their page posted by someone on the higher functioning end of the spectrum? If your answer is “almost never” or it consists of someone named “Kerry Margo” then you’re right on the money. Before I continue allow me to explain who Kerry Margo is.